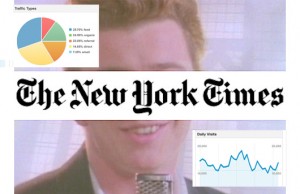 Last week’s fatal shooting at the Empire State Building sparked a great deal of discussion surrounding the ethics of posting gruesome pictures of the victims. These are the actual links, but be forewarned that they may be unsettling to some readers. Jim Romanesko checked with the Times and received a statement back saying, “It is a newsworthy photograph that shows the result and impact of a public act of violence.”

Jeff Jarvis agrees so much that he passed the images along on Twitter and wrote a response to critics who said the posting without warning was inappropriate. Jarvis said, “I say it is a good thing that we see a more unvarnished world. Perhaps then we’ll have a real debate about guns…” Jarvis also argued “that in any case, we’d best get used to it, for as we all well know news and images of it won’t come from reporters and credentialed photographers first and won’t be filtered through media before it comes to us.”

Leaving aside the fact that Jarvis’ politicization of the event is an unnecessary red herring, the substance of Jarvis’ argument is that such images are inevitable in today’s world of Facebook, Twitter and other unmediated outlets on the web. It’s essentially the “everybody else is doing it argument” that I’ve tried to explain to my children is never a good rationale for decision making.

The Times’ perspective is slightly more substantive suggesting that there are situations when public images are so powerful that they need to be shown. It’s a point of view that no doubt every ombudsman at any news agency has had to wrestle with, and it’s almost a certainty that the growth of social media has made these questions all the more difficult for them.

I’d like to consider first, Jarvis’ argument- that the filters are long gone and therefore there is nothing one can do to stop violent images from coming through our browsers. Jarvis seems to suggest that all things are equal on the web- that the NY Times’ reach is somehow equal to this guys.   It is a false equivalent that I see used too often to justify bad decorum on the web. The fact is that traffic on the web has many similarities to “traffic” in legacy media.  If we take a look at the top 25 sites on the web, we’ll see old familiar faces like the New York Times and CNN.  There are admittedly a few anomalies on here, one of the most popular being Reddit.com.

While Reddit is admittedly a popular site, its reach is not nearly the same as other media. Google ranks Reddit’s unique visitors at 13M a month. Compare this to the Times that has 67M unique visitors a month or CNN.com at 110M. The point is that most mainstream media still have a much larger reach. The same would be true if we looked at demographic characteristic, where places like the Times and CNN still reach a broader demographic in terms of age, income and education. If Jarvis’ argument is simply that somehow the web has democratized information he might do well to check out Matthew Hindman’s research that shows that despite the vast number of independent sites, most web traffic is still concentrated in only about 20 mainstream online news organizations.

Since such sites still receive the vast majority of traffic on the web, I would suggest that in many ways they have a greater obligation to maintain public trust and to wrestle with such ethical questions. Jon Stewart summed this argument up  pretty succinctly when Tucker Carlson justified questionable activity on the political show, Crossfire, by pointing to similar behavior on Stewart’s own show.

Stewart said, “I didn’t realized that the news organizations look to Comedy Central for their cues on integrity.”

Jarvis’ argument is no different. He might instead take his cues from Uncle Ben who summed it up quite well when he told Peter Parker “just because you can…doesn’t give you the right to. Remember, with great power comes great responsibility.” Even Spidey seemed to eventually grasp this.

There is also the question raised by the Times. The argument is that there are some images so powerful that the public has the right to know. I’m in agreement with this. I don’t think that question, however, is even relevant in unmediated contexts like the web. The real question is how should such images be distributed?

In cyberspace readers need to be allowed to choose whether such content is appropriate for them. We’re in the informing business in the news- the story telling business, not the shock and awe-business. It’s up to our readers to determine how much they can handle; I don’t claim to know all the sensibilities of my readers, nor do I accept the premise that it is somehow our journalistic right to deny them agency by putting such images in front of them without any warning.

Such practices are not only bad business because they push some readers away and bring additional emotional duress to the families of such victims, they are also bad practice on the web where simple warnings, links, and other technological affordances can be used to help our readers decide for themselves how they receive the news. When the Times uses an image of a victim splayed across the sidewalk with his blood trickling into a gutter on the front page of its website, it’s already removed that choice for the reader. A truly democratic web puts the information out there in a way that gives the reader the right to decide how and when he or she receives the information. If anything, the technological affordances of the web give us a much better opportunity to do this in ways that weren’t possible in print and TV.

Anyone familiar with popular media culture is aware of the phenomenon of RickRolling, where unsuspecting readers are mislead into clicking on a link that promises one thing, and only leads them to something else- often the popular video by Rick Astley. Some unsolicited advice to the media, don’t RickRoll your readers. Leave that kind of stuff to the 13-year-olds on 4chan. Your readers will appreciate it.